Get a better grip on your fishing trip

Consult with our guides

Fishing Lodge Fyn offers a unique guiding service, which might help you to get a better fishing experiences during your stay at the lodge.

We cover the island of Funen, Langeland and the South Funen islands. The guides offer campfire dinners and hot coffee on the shore - if you so wish. A fee will be charged.

Read more about our guide service and see rates, options etc. below. 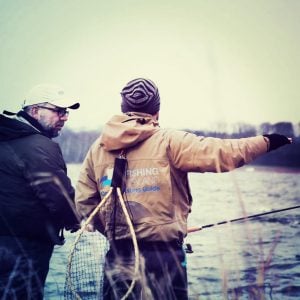 A Fishing Lodge Funen guide offers experience and expertise, that will save you at lot of time. Finding and outwit the Sea Trout, can be tricky. The guides master both fly and spin fishing - from the coast and boat. We show secret fishing spots or unique small islands, that can be fished from shore and boat. 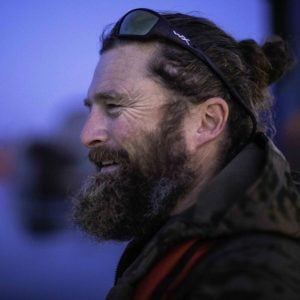 Claus is a certified guide. Claus is a passionate and innovative spin fisherman. His expertise is fishing for sea trout from a boat in the South Funen archipelago.

Claus is one of the first guides in Denmark, who was certified through The Danish Anglers Association, Seatrout Funen and Fishing Zealand. The certification is your guarantee for a high quality and not least for the necessary knowledge about the fishing.
Claus is a passionate and innovative spinfisherman. His favorite fishing is boatfishing spincasting for seatrout in the sea south of Funen. He finds it really cool sneaking around on one of the more unaccessible fishing spots, or sight fishing for seatrout in high sunshine and mirrorlike conditions.
He is very fond of the beautiful south and east coasts of Funen, where you can often find him in waders and rod in hand, chasing the silvery seatrout. He also likes to fish for salmon, pike, cod mackerel or a fine dish of flatfish.

Claus is a trained biology teacher and has for the last 19 years worked with his focus on theaching, the outdoors, maritime teaching and fishing courses. His long and broad experience within the reals of outdoor life, teaching and fishing, makes him a an extremely competent guide and teacher, who always seeks to give the client the best experience.

Claus is the owner of ”fiskekurser.dk” and ”boatfishing.dk” ”Fiskekurser.dk” has each year taken several hundred client fishing and makes a broad spectrum of guided tours, fishing courses and company events, with fishing as the main subject.
”Boatfishing.dk” is the only Danish company making guided boattours in the sea south of Funen.

Claus is a very popular fishing guide, with regular clients from both Denmark and abroad. He guides for Seatrout Funen and of course for ”Fishing Lodge Funen”.
You can book Claus for guide days both on the coast and from boat, courses with specific subjects and events. 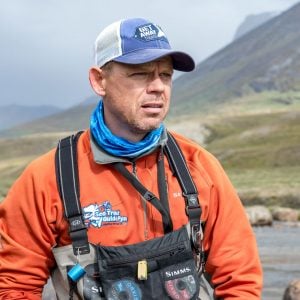 Niklas is a certified guide. He has been occupied ind the fishing gear business for more tha 15 years and thus a lot of "silver" in his luggage.

Niklas has, as one of very few persons in Denmark, been certified as guide through Danmarks Sportsfiskerforbund (the Danish Anglers Association), Seatrout Funen & Fishing Zeeland, and this is your guarantee for a high quality, and not the least, the necessary knowledge about the fishing.
Through his experience of 30 years with the seatrout fishing, and his daily work in Go-Fishing, he has a big contact to a lot of seatrout anglers. He has worked in the tackle trade for close to 15 years, and all this adds up to a large and broad knowledge, which will bring “silver” to your baggage.
Niklas is also the owner of the company “Seatrout Guide Funen”, where he shares his knowledge in the shape of a free blog about seatrout, salmon and pike fishing in Denmark and abroad.
He runs his many popular courses through “Seatrout Guide Funen”.
Through the last 15 years, he has been running many different seatrout courses, as saltwater flyfishing courses, reading of the fishing waters, and the extremely popular “Go-Fishing Seatrout Master Academy” for both fly- and spinfishermen.
Besides the courses, Niklas is a wellknown fishing guide, with many local and foreign customers, and he is guiding for both Go-Fishing, Seatrout Funen and of course “Fishing Lodge Funen”.
You can book Niklas for both guiding, fly casting lessons, and talks about seatrout fishing.
Seatrout Guide Fyn www.seatroutguidefyn.dk 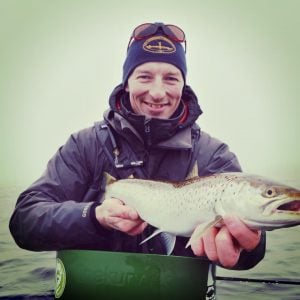 Kenneth is the tenant of Broholm Castle and the daily host at Fishing Lodge Funen. He is, besides being a skilled cook, also a certified fishing guide and and offers boat trips.

Kenneth lives in the beautiful region of South West Funen, only a couple of hundred meters from the coast line.

All through the year, Kenneth will fish for seatrout, mainly with fly and normally on the southern part of Funen. He is most enthusiastic about the Spring and Autumn seasons, but according to Kenneth mild winters with day tempatures of 5 degrees or more are highly underrated and can offer a fantastic fishing.

Kenneth started at age 12 with fishing for flatfish in the harbour of Kerteminde and especially in his summer holidays, he often used his bicycle to go from Odense to Kerteminde with his rod on his back. Later on he began fishing in the river Odense and when he turned 18, he started flyfishing on the coast for seatrout on a big scale.

As a trained chef, he travelled to Greenland, and later on he lived for 10 years in Norway, and the fly rod was with him all the way. After he returned to Funen, he has each year been at least twice in Norway for trout and salmon, and a working holiday as lodgemanager on the river Alta in the late summer.

Kenneth is the manager and daily host on "Fishing Lodge Funen", besides being a certified angling guide and skipper, so he is always ready to help you with good information and up to date tips on the fishing, and answer all your questions during your stay.

Our guide service also offer boatfishing, moving quickly between the sea trout sites, or straight out fishing from the boat. Cod, flatfish, mackerel, etc. are also possible fishing prey. All guided tours can be arranged for groups and families up to 3-5 people.

Competent guide service is at your disposal

It is money well spent. See what we offer and what it costs below. 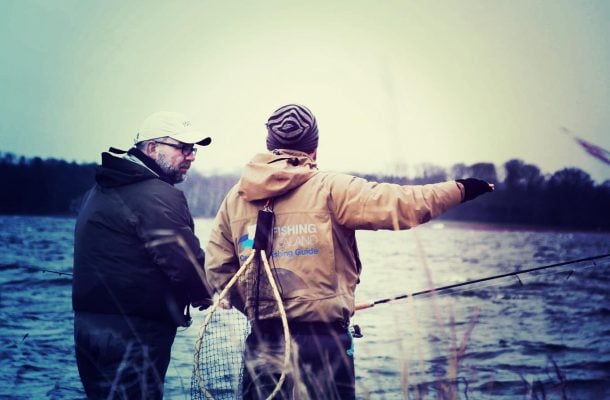 We cover the whole of Funen, Langeland and the South Funen Archipelago.
The guides offer campfire dinners and hot coffee on the shore - if you so wish- for a small fee. 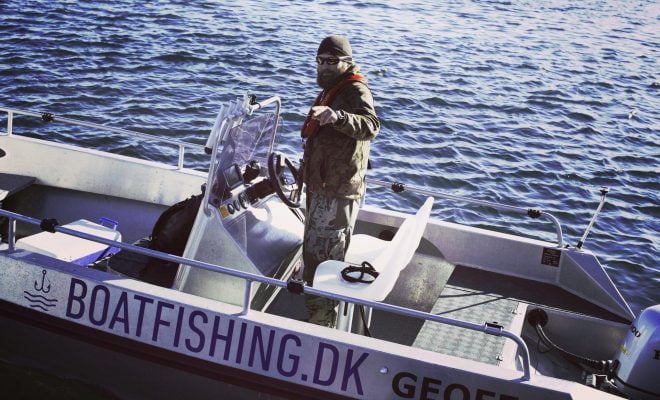 More options when you fish from a boat: 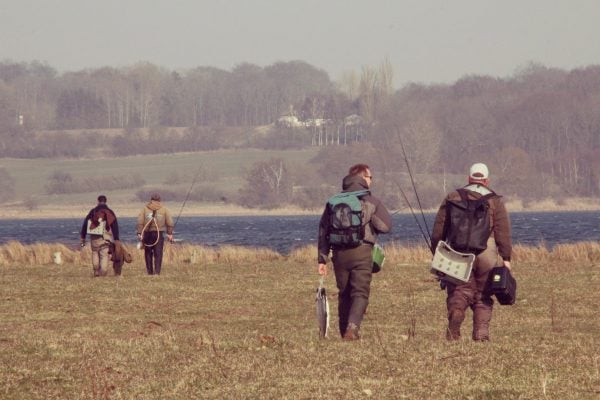 We have the following equipment you can rent during your stay.

Rates from 93€ per night

All the guides of ”Fishing Lodge Funen” are active anglers themselves, with many years of experience to their credit, and their knowledge is the result of thousands of hours on the water.

The persons behind ”Fishing Lodge Funen” are all certified angling guides. They have travelled the world and have helped clients on many different fishing waters. They are fully aware that their clients expect a high quality, when they book a fishing guide, and that fact means that we cannot accept everybody to guide for us.

When you book a fishing guide, he will be 100% focussed on you as his client and we will do everything in our power to give you a successfull experience.

Success is not always measured by the fish caught, but it can also be the showing of various fishing spots, which you can fish the following days on your own hand.

This means that you will be well prepared to fish on your own, as the guide will have taught you the necessary methods, tips and tricks.

You will be able to use this knowledge again and again, and it will increase your chances to catch fish on future trips, and your experience with the fishing will be easier and better. You can better enjoy the nature while you are fishing and relax, also during your stay at ”Fishing Lodge Funen”

The guides never fish themselves, when they are booked by you. We are there for you and will be keeping an eye on you all day long.

The guides from ”Fishing Lodge Funen” are your shortcut to success during you angling vacation on Funen.